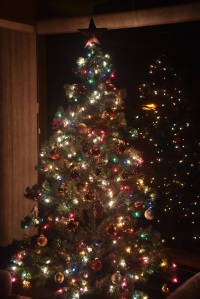 His favorite, of course, was to climb people (he was three or four, after all). Seated people were the easiest, but he’d clamber up the standing people as well. One moment he’d be on the floor, and the next moment he’d be waving from the shoulders.

It’s possible, just possible, that he got a little help on the way up to the shoulders.

There was one exception to his love for climbing, though, and it was the stepladder his parents set out when it came time to decorate the Christmas tree. I don’t know why he didn’t like it. Maybe it wiggled in some way that seemed wrong. Maybe the steps were too far apart. Maybe he didn’t like the color (it was bright yellow, and doesn’t that just scream “Danger!”?).

Whatever the reason, when his parents set it out so that he could climb onto it to put decorations on the tree, he wouldn’t go near it. He didn’t even put his hand on the uprights, let alone a foot on the treads. He placed his ornaments from the safety of the ground and, it must be admitted, from the extended arms of his father who held him out like a person-shaped crane.

Even at three or four, though, he knew that a ladder shouldn’t hold him back (or at least on the ground), and he determined that next Christmas he’d make a start on that ladder. He wouldn’t go for the top – not yet – but maybe the first rung would be an accomplishment.

That’s how it went. The next year he summoned his faltering courage and put one shaking foot on that first tread, then the other. Between the step and his growing height, he could reach further up the tree with his ornaments. The next year, on the second step (and still taller), he reached higher still.

He was determined to reach that highest step, and place the star on top of the tree with his own hands. Someday. Year by year, little by little, he’d make his way there.

Has he reached the top? Well, no. He’s still young, and there’s a few steps left on the ladder. He’s making progress, though, each year a step higher.