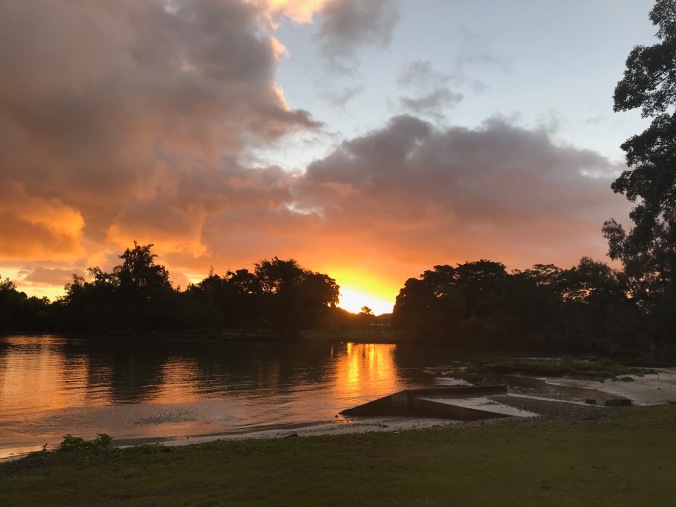 What do I know
of a “way of peace,”
O God? I know
of competition,
games and grades,
measuring my salary
(comparing it with others’).

What do I know
of a “way of peace,”
O God? I know
of violence and power,
stern coercion,
strict adjudication
of all faults and crimes.

What do I know
of a “way of peace,”
O God? I know
poverty and wealth,
health and illness,
racism and sexism,
tear gas on the border.

What do I know
of a “way of peace,”
O God? I know
these many ways
of strife, and grief,
and harm, and death.
And one thing more, perhaps:

If everybody wins,
If not one person loses…

That is the way of peace.

A poem/prayer based on Luke 1:68-79, the Revised Common Lectionary Gospel reading for Year C, Advent 2.

Photo of a Hilo sunrise by Eric Anderson

Can I pray for peace, O God,
when the bullets fly
and the blood soaks
the weeping soil?

Can I pray for shelter, O God,
when the houses burn
and the earth yawns wide
to breathe out fumes?

Can I pray for safety, O God,
when leaders condemn
the innocent with the guilty?
“They’re animals.”

Yet what else can I do, O God?
I raise my voice for peace.
I rush to help the volcano-shocked.
I condemn the condemnation.

What more can I do, O God,
but pray that You
will have more agency
than I.

Aircraft circled in the sky, then turned.
The cylinders beneath their wings detached
And with the grace imparted by geometry
They traced their arc into the town.

What was the sound as they erupted?
Did explosions echo from the walls
Already fractured, crazed with crevices
From bombs and bullets previously struck?

Or was it silent, as the creeping poison
Exited the canisters and, carried on the very breath
Of air, passed softly through the lips
Of people, passed into their blood.

And the world paused,

Unguided aircraft in the sky made descent
And in a mad cacophony of death
Erupted on the runways, in the hangars,
Tearing concrete, metal, wood, and flesh.

For the children of Khan Sheikhoun,
For the parents who will share their graves,
For the well-loved and the disregarded
Whose days ended in the poisoned air:

So says the superpower.

Tell me, children (and adults) of Khan Sheikhoun,
Has your life (too brief) been honored
With the blood that stained the taxi-ways
Of this airfield of your killers? Has it?

Tell me, children, do you know
If these explosions, this destruction
Will prevent another scene of horror?
For we have supped full of horrors…

Forgive us, children. We have failed.
We did not bring your long-for peace to you.
We have not brought your longed-for peace
To anyone. We have brought death and war.

Until the planet’s children
Live in peace and joy.

No more.
No less.

On Tuesday, April 4th, a chemical attack on the village of Khan Sheikhoun in Syria killed over eighty people. Western leaders identified the Syrian government as responsible, and on Thursday, April 6th, United States forces attacked the Shayrat military airfield with cruise missiles, describing it as the source of the chemical bombing.

The very next day, Syrian warplanes took off from the same base and carried out conventional air strikes. The war continued.

Today marks the 75th anniversary of the Japanese air and sea attack on the United States at its bases around Pearl Harbor. The day continues to fulfill President Franklin D. Roosevelt’s prophecy that it will “live in infamy” to Americans, and indeed to others around the world. Over 2,400 Americans died in the one-sided two hour battle, the first of some 419,000 who would perish before the war ended four years later.

There is a greatness in that. It calls for the best.

Here in Hawai’i, however, I find it easier to see the price of that greatness. The commitment and the dedication and the valor (which can be found on both sides of the battle) preserve a nation, but also imperil its values. Martial law was imposed on the Territory of Hawai’i within hours, and would not be lifted until 1944. American citizens were detained and imprisoned without criminal charge or conviction. Military courts suspended the writ of habeaus corpus. In fear for their liberty, people buried or burned possessions that linked them to Japan: records, photographs, mementos.

The infamy of Pearl Harbor has company, lots of company: The Bataan Death March. The horrors of Germany’s invasion of the Soviet Union. The firebombing of London. The abduction and rape of thousands of women by Japanese soldiers. The murders of millions of military prisoners, gay men, Romani, and Jews in German death camps.

Lest we assume a virtue that is unwarranted, however, the infamy of Pearl Harbor has plenty of Allied company: The savage campaign on the Eastern Front. The firestorm of Dresden. More firestorms in too many Japanese cities to list. The atomic bombs of Hiroshima and Nagasaki.

Over 60 million people died in the fires of World War II.

We may, and should, honor the best. We dare not ignore the worst.

Let Pearl Harbor Day be one we honor for its summons to peace, for its warnings of the costs of war. Let it stand for the infamy of war itself, and its crushing weight upon humanity. Let it shine as a beacon for peace.

Internees at Tule Lake, California, in 1942.

Last Friday was Veterans’ Day in the United States, which is a day off for those of us who work for Church of the Holy Cross UCC in Hilo, Hawai’i. I wasn’t relaxing on a beach, however (which isn’t where I relax in any case). I was presiding at a funeral.

The funeral of a veteran. A different kind of veteran.

On Veterans’ Day we honor those who serve the country and defend it from war, “who stand between their loved homes and the war’s desolation” (Francis Scott Key). And as Abraham Lincoln observed at Gettysburg, it is altogether fitting and proper that we should do this. Yet there are others who endure the impact of the world’s and the nation’s conflict, and receive no honors, no recognition, no holy day. Evelyn was one of these.

Evelyn was a native-born American citizen interned by the United States Government during World War II.

Between 110,000 and 120,000 people whose parents, grandparents, or great-grandparents had been born in Japan, 62% of them U.S. citizens, were ordered from their homes in Pacific coastal states (though not Hawai’i, where it was simply impractical) and housed in camps from Louisiana to California. Evelyn, a college-age young woman, observed that disabled children received no schooling at the Tule Lake, California, camp where her family was sent. So she taught them.

Thinking about Evelyn led me to think about so many others who endure the stresses of war. Gold Star families endure terrible losses in each conflict. Parents, siblings, spouses, and children live each day with anxiety for those they love who go in harm’s way. Support people, some who wear the uniform and some who do not, labor to support those who return. Some they treat for wounds. Some they assuage the psyche. Some they help find housing, or to resume interrupted careers. Some they aid to understand the now-unfamiliar ways of civilian life.

In many conflicts, more civilians die than soldiers. They die from bullets and grenades that come their way, they die from bombs and shells, and they die from malnutrition and disease. The catastrophe we call World War II claimed the lives of 21 to 25 million people in uniform. It slew 50 to 55 million civilians, including 19 to 28 million who died from contagion or hunger.

Today, I honor these civilian veterans: the refugees, the interned, the families, the supporters, and those who pray that the shooting and shelling around them will just stop.

Today I honor them, and for their sake, I pray that God’s children will learn the ways of peace, and make no new civilian veterans to endure the sorrows of war.