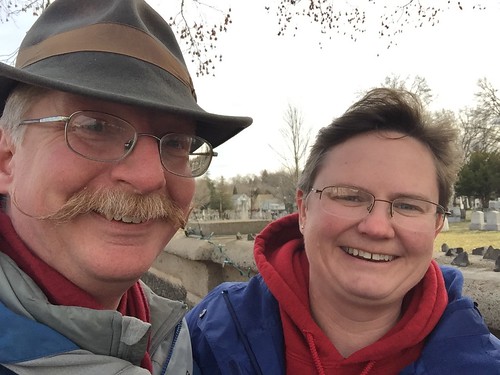 Let’s face it, the difference between the Old Year and the New Year is pretty arbitrary. The calendar doesn’t align well to any particular astronomical phenomenon (why isn’t it on the solstice, anyway?) or historical reference of great note. One may well ask why observe it now as, say, on March 1st, or September 8th, or April 31st (“Eric, there is no April 31st.” “As long as we’re fiddling with the beginning of the year, why stop with that?”).

And one will not get a very useful answer.

But as I wrote in a Pastor’s Corner column that hasn’t been published yet, touchstone points are valuable things. People who worship regularly have developed a habit that, potentially, offers them a valuable reflection point every week. Birthdays and anniversaries alike provide additional moments to look back and consider. National and cultural holidays can do the same.

So, arbitrary or not, I’ll take this New Year’s opportunity to look back on a year that, let’s face it, was pretty darned significant in my own life and in the life of the world. After seventeen years with the Connecticut Conference of the United Church of Christ, I moved to a new pastoral call at Church of the Holy Cross UCC in Hilo, Hawai’i.

I told a few family members, friends, and colleagues, and they predictably shared the news a bit further. One friend shocked me by asking if I was going to Hawai’i before it was public. It turned out that he’d visited the Holy Cross website and found the material about their upcoming vote.

Other friends, well, they just got the word. The photo above is of me and my friend Kim Hoare, Executive Director of the Carpenter’s Boat Shop in Maine. She was visiting Connecticut for a few days between Christmas and New Year’s, and knowing it might be the last opportunity to see her for some time, I made a point of getting together. I’d also planned to give her the news.

Well, she already knew. But it was the beginning of many farewells, farewells that dominated (what I experienced as) the winter of 2016.

I tried hard not to “leave in place,” as happens so often in transitions, and found that while I could succeed to some degree, I also had to let more and more things go as those who would follow me in that work needed to take the lead. Still, I made podcasts and took photos right up until the end – I spent my last official day with the Connecticut Conference taking photographs at the March Super Saturday.

The Conference’s farewell service had me laughing and smiling and in tears. So many people expressed so much love for me – so many people revealed that they understood the things that have been important to me and which I’ve tried so hard to do – so many people offered their best wishes and their prayers. I confess I still go back and watch the video of that service sometimes.

Moving from Portland was somewhat bitter, and mostly sweet. I don’t miss that apartment, which had never been a home to me despite living there for over ten years. However jarring it was to see the floors cleared of everything and the hatrack empty (and it was jarring), it was more exciting to see the boxes loaded into the container as it made it trip across the continent and then halfway across the ocean.

Last karoake nights, last collections of photos, last hugs to friends and colleagues as their near neighbor… and then I was off. I had hoped to make something of a “Grand Tour,” visiting friends in three or four cities across the country as I made my way to Hilo, but it just didn’t come together. I ended up making one “side trip” to spend a few days in Orlando, Florida, with my good friends Leigh and Sue. Leigh and I have known each other since our days at Andover Newton Theological School, and she was a tender and gracious host as I caught my breath before beginning my ministry in Hilo.

There’s a lot to learn. The people who live here come from many different cultures, many of which I know little about. There are differences not just between people of varying heritages, but also between the different islands (and, heaven help us, between sections of the same island – ask someone from the Windward Side of O’ahu about Honolulu and you’ll get an earful). The accents are different, the music is new.

I’ve been re-learning the joys and sorrows of pastoral ministry. The people are wonderful, simply wonderful, and that’s the root of the joys. It’s also the root of the sorrows. I’ve officiated at nine funerals since I arrived, and although some were for people peripherally connected with the church, others were not. The most recent funeral was for the woman who greeted me so warmly on my first day in the office, and made sure that I pronounced her name correctly. She is only one of the ones I miss terribly despite having known them such a short time.

That is, of course, the downside of this move, because there are others far away whom I miss terribly. Parishioners have graciously invited me to share in their Thanksgiving, Christmas, and (tonight) New Year’s celebrations with them. Those have been wonderful occasions. There are still faces I long to see at those times, and it will be some time yet before I can see them again.

I’ve been fortunate, however, to have some visitors. My daughter Rebekah spent nearly a month with me last summer, and we were able to celebrate her 21st birthday together with her uncle (my brother) Christopher who came out that week. In September, as the Hawai’i Island Association installed me, my dear friend and singing partner Paul Bryant-Smith came out to charge me and to get a quick sense of the island. We literally drove all the way around in a day.

In addition to installing me as pastor, Church of the Holy Cross celebrated its 125th anniversary this year. That meant, among other things, that I wrote a song for the occasion, which Hawai’i Conference Minister Charles Buck managed to record on this video:

Did I mention that I’ve been learning ukulele?

I’ll say this for pastoral ministry: it’s better suited to songwriting than Conference communications work! I’ve written far more this year than I have for some time – perhaps ever. It’s not all great, I’ll be the first to admit, and I’m a little stymied to find recording time (and keeping traffic noise out of the studio). But it’s happening.

A brief weekly video is happening, too, for those who miss my face or voice. The series is called, “What I’m Thinking,” and it comes out on Mondays on my YouTube channel (and embedded in the Church of the Holy Cross website).

I’ve also been exploring and appreciating this beautiful place which is now my home. I keep coming back to the Kilauea Crater with its power and stark beauty. Lava entering the sea means that this island is bigger today than it was when I arrived, and it will be bigger tomorrow than it is today. There are waterfalls and rainbows, waves and caverns, blossoms and birds which regularly astonish me.

And there are the people whom I’ve been called to serve. I’m very fortunate to be among them, and I hope that I’ll be a blessing to them in the days and years to come.

May you all have a New Year of wisdom, insight, inspiration, determination, and abundant blessing.