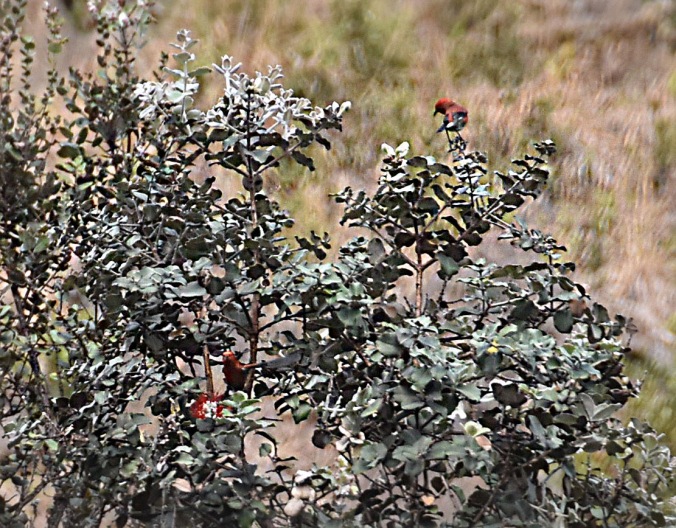 Wait, I think I just heard it…

Yes, it’s the ‘apapane. (The room settles into comfortable expectancy.) Although actually, it’s not.

They were brothers. They’d hatched from eggs in the same nest, about an hour apart from each other.

Why yes, just the way you two are brothers. Only I don’t think you two were hatched? Were you? Am I wrong? No. OK. I thought not.

Well, these two ‘apapane were hatched just an hour apart.

They grew up together, and learned to fly together, and had the same friends, and they wore the same wonderful feather cloaks of rusty red and white and black.

Not surprisingly, since ‘apapane tend to like the same things, they had the same taste in food. That’s also where the trouble came in.

You see, when they’d see an ‘ohi’a tree in blossom, they’d both swoop down to drink the nectar from its flowers. That’s fine. That’s what ‘apapane do.

But these two, well, not only would the swoop down to the same tree, they’d land on the same branch. Not just the same branch, but the same cluster of flowers. And when they went to dip their beaks, they’d aim for the same single blossom. At the same time. So they’d bang their foreheads together.

Each time they’d scream, “MINE!” they’d jab their beaks at each other, and the screeching echoed around the forest.

Their friends soon learned to get out of the way when this started. For a while, they tried pulling them apart, but they weren’t so much driven away as ignored. They’d scream “MINE!” no matter what they did.

Their parents tried to intervene, and got no farther. In desperation, they went to the older ‘apapane for advice. Some had some, and they tried it, but nothing worked. Finally, one wise ‘apapane, who had seen many things in her time, said, “Let them alone. They will discover one day that the ‘ohi’a do not belong to them.”

There came the day when the two brothers flew to the same tree, landed on the same branch, hopped to the same cluster, and bonked their heads together over the same blossom. The screaming got started and wouldn’t stop. The other ‘apapane flew to other trees to escape the noise, but the two brothers didn’t notice. They didn’t notice as the sun dipped below the treetops. They didn’t even notice that the ‘ohi’a blossoms themselves were fading away, dropping from beneath them and going to seed. They screamed and they screamed and they screamed.

Not even an ‘apapane’s lungs can keep that up forever. Gasping for breath, they looked at each other, and then looked down at the blossoms that had faded away beneath them. It was a cluster of seeds. And finally they knew.

There are two ‘apapane in the digitally enhanced image above. Photo by Eric Anderson.