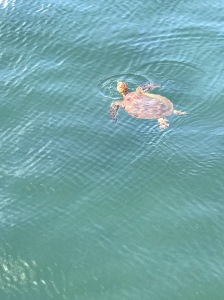 There are plenty of things to like about being a honu, a sea turtle. Just to start, there’s the joy of swimming in warm tropical waters, and of dipping down deep for the refreshing coolness, and rising to the surface again for a breath of air. Oh, yes, that’s something to like.

Swimming will also bring you down to the beds of sea grass, where you can nibble the tips from their shoots. Well, yes, I expect the honu would enjoy that more than you would, or than I would, for that matter. But we’d all enjoy doing acrobatics in the water, and when you’re ready for a rest, I know we share with the honu a huge affection for naps in the warm sun on the beach.

A young honu had done all this and more. Born on a beach on this island, he’d actually made a swim all the way around, and further, he’d taken a little expedition over to Maui. He’d seen different kinds of fish, watched seabirds float on the air, and tasted different sorts of seaweed. He’d sunned himself on white sand beaches, gray sand beaches, black sand beaches, and even a green sand beach. He rather thought he’d seen it all.

But he found one older honu rather puzzling.

He found her one day after she’d pulled herself up on a beach for a nap in the sun. The trouble was, there wasn’t any sun. It was clouds from one edge of the sky to the other. She appeared to take no notice as she lay there placidly on the beach, just as still and calm as if the sun were beaming down.

The younger one hauled himself up close to her and asked her what she was doing.

Then he asked again. And again. He had to tap her flippers once or twice to catch her attention. When this honu napped, she took her naps seriously. Finally she was awake enough to hear his question.

“What are you doing?” he asked.

He took another look about to make sure of his facts. No, he didn’t see any sun.

“There are things in life that only come along once or twice,” she told him. “There are some kinds of fish you’ll see only once, or maybe even never, that your elders can tell you about. There are seaweeds that only grow in special places. There are friends who’ll decide to move about and you may not see them for years.”

“But there are other things,” she went on, “that come and go all the time. The kohola (humpback whale) visits in the winter, and swims away in the spring, and comes back the next year. You eat the tips of the sea grass, and they grow more. The tides roll up and roll back on the island shores.

“Sunshine is like that. It’s waiting behind those clouds. There will be sun on the beach.”

Sure enough, the clouds parted and a sunbeam glistened on the beach and on the water. Just for a moment, as it happened. And not where the two honu were talking. In fact, it disappeared almost as quickly as it appeared.

“It will be back,” the older honu sighed. “For some things — sea grass, rain, waves, tides, and sun — all you have to do is wait.”

And she laid her head back down on the sand, closed her eyes, and resumed her nap in the sun — the sun which would come as she waited.